The main march was stationed in Washington, D.C., but as many as 673 other “sister” marches took place across the world with an estimated 4.8 million total marchers participating in the event nationally and internationally.

According to the March’s mission statement, “The Women’s March on Washington will send a bold message to our new government on their first day in office, and to the world that women’s rights are human rights.”

A number of Manhattan College students took part in the event, both in New York City’s Dag Hammarskjold Plaza and Washington, D.C.’s Capitol Hill.  Both events were organized by Government and Politics Club adviser and Associate Professor of government, Margaret Groarke, Ph.D.

Groarke believes that there is no better time to become politically active than during college.

“You have a more flexible schedule, somewhat less responsibilities than you will have at future points, and you’re in a place where you have the resources of the college,” Groarke said.  “This is the point where you should become an active citizen and figure out what are the things that are important to you and how are you going to go about making them happen.”

Groarke also facilitated the organization of a separate group to attend the March for Life, an annual pro-life march that also takes place in Washington, D.C. each January.  Despite the two marches seemingly conflicting each other, she welcomes political activism from any viewpoint.

“I’m spending time on this not because of my own views about either thing, but because I see it as part of my role of encouraging students to be active on the things that they believe,” Groarke said.

Marches have been among the favorite methods of unconventional government participation for quite some time.  Most notably, they are a visual demonstration of how a large group of people feel about an issue at stake.

Groarke says that political activism must be pursued even after the march  ended.

“If we all go to a march in D.C. this weekend or next weekend, and then we don’t do anything else about that issue, it doesn’t have a whole lot of impact,” Groarke said.  “But if people are energized by being with so many other people who share their views, and maybe they pick up a piece of literature about the issue they care most about, and say, ‘Oh, I can do this.’”

An estimated 500 thousand people took to the streets of Midtown Manhattan on Saturday for the Women’s March on New York. Among the thousands were groups of Manhattan College students.

Samantha Roth organized a large group to attend the event together. As a double major in Peace Studies and Government, she felt it was her duty to help band students together to march for the cause.

“This is what I will be doing with the rest of my life. I want to take charge and help guide people, women especially, to find their beautiful voice and speak out against injustice,” said Roth.

Participants in the march came prepared with signs bearing slogans that ranged from creative and witty to assertive and provocative.

The line of marchers stretched from Dag Hammarskjold Plaza, around Grand Central Station and up to Trump Tower on 5th Ave. Traffic was blocked in several areas around the march route.

A string of celebrity appearances, including actors and local politicians, occurred in various locations on the route.

Paula Espitia and Amber Perez, both freshmen at MC, shared an encounter with one of these celebrities.

“We were just marching and saw people getting excited, so we look over and right next to us is Whoopi Goldberg talking to ABC cameras and leading her group,” said Espitia. “It was just so cool to see her there with everyone else in the march. It makes you realize how big this is.”

The march carried on after the expected end time of 4 pm as people continually poured into the packed streets to let their signs be seen and their voices be heard. 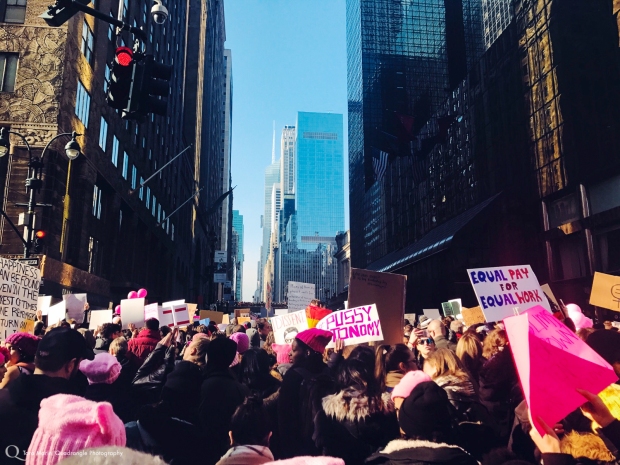 Early Saturday morning, 39 Jaspers met at Gaelic Park to take to the streets of Washington D.C. and join an estimated 500 thousand others at the Women’s March on Washington.

The protesters’ day began bright and early at 6 a.m. when the bus left campus.  The group arrived in New Carrollton, Md. a few hours later and took a thirty minute Metro ride to the protest site on Capitol Hill. After the packed metro ride, the marchers spilled out into the streets of Washington D.C. to begin their demonstration.

The event began with a rally at 10:00 a.m., followed by the march itself, which was scheduled to begin at 1:15 p.m. The streets were so packed with participants that the march was delayed for some time. When the march finally began at about 3 p.m., the streets of the nation’s capitol rang out with the sound of protesters chanting.

Among these protesters was MC student Gabriella Sydney Ramirez, and for her, it was go big or go home.

“I know there are all of these sister marches in New York and Philly, I just really wanted to be a part of the one, one of the largest marches in history,” she said.

Sophomore government major Liam Moran agreed with Ramirez, and was particularly interested in the potential impact of other young adults.

“I wanted to see how our generation tackles the problem, getting our ideas out there via peaceful protest,” Moran said.

Moran was unusual in that he was one of only five male protesters from the college.  He, however, believes that men can be powerful advocates and allies in the fight for equal rights.

“When dealing with women’s issues, I would say think of your mother or sister in that position and what would be most beneficial to them: restricting the right or enabling the right,” he said.

One thing was for certain: the voice of MC was heard at the Women’s March on Washington. Peaceful political protest is becoming a powerful tool for the next generation.

“There’s some ways that we can participate conventionally,” said Groarke.  “We can go do grassroots lobbying, we can vote, we can write to our members of Congress, but sometimes we have bigger impact when we do something that’s a little bit outside of the box.”