What a way to go out.

As conferences around the country chose to cancel their tournaments last Wednesday due to the ongoing COVID-19 pandemic, the Manhattan women’s basketball team were bracing for the worst. What was supposed to be an exciting final run for the team turned into a quick stay after the Metro Atlantic Athletic Conference called off their tournament 30 minutes before tip-off between Manhattan and Quinnipiac on Thursday.

Sadly, the fate of the tournament went downhill rather quickly after news broke of NBA player Rudy Gobert’s infection with COVID-19 on Wednesday night. Around 10 p.m. that night during a men’s quarterfinals match-up between Saint Peter’s and Iona, the MAAC announced that the rest of the tournament in Atlantic City would continue with only family members, event workers, and essential media in attendance.

The news would only get worse on Wednesday with the biggest conferences opting for cancellation as the day progressed. It got to the point where the MAAC, along with the Southwestern Athletic Conference and Mid-Eastern Athletic Conference, were the only conferences not to shut down their tournaments. The SWAC was the next domino to fall at 1 p.m., leaving it between the MAAC and MEAC to see which conference would be the last standing. Shortly after 2 p.m., Jon Rothstein of CBS Sports confirmed everyone’s worst fears on twitter: 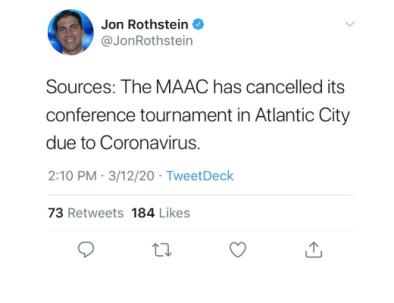 Jon Rothstein of CBS Sports confirmed the cancellation of the MAAC tournament via Twitter last Thursday.

“If the NBA was going to set that precedent, then they weren’t going to let college athletes who weren’t getting paid play,” Manhattan head coach Heather Vulin said.

Senior Pam Miceus started to feel concerned about the fate of the tournament after seeing what other conferences were doing. Although not surprised by the decision, Miceus is rightfully disappointed about the abrupt ending to their season. Miceus is one of four seniors — along with Julie Hoier, Tuuli Menna, and Emma Bedeker — who will leave the program in a better place than when they arrived. Three years ago, the Jaspers won eight games in Vulin’s first season, when these seniors were only freshmen. Manhattan’s constant improvement over the last few years is what led to this 15-win season.

“Once we [the team] heard that news it was obviously really tough being a senior,” Miceus said. “We have four seniors on our team. We really wanted to do something great our last year playing for our team. We’ve been working our entire lives for these opportunities.”

Upon hearing the news, Vulin’s first order of business was to inform her staff, which proved to be one of the toughest responsibilities of her coaching career. As heartbroken as Vulin is for her players, she realizes that the team’s success this season would not have been possible without the dedication of her coaching staff. Most of her staff has been with her since day one on the job and have helped foster the winning culture now in place.

“Everyone keeps talking about the players,” Vulin said. “This is my fourth year. Most of my staff has been with me this whole time. We ended the season on an incredible note winning six of our last seven. I really felt we found a recipe for success and possibly earning an NCAA berth.”

Looking back, leaving for Atlantic City a few days before their scheduled game against Quinnipiac turned out to be a smart decision. Despite not having the chance to play a game, the players are grateful for the fun they had together off the court while in Atlantic City.

“Moving the MAAC tournament to Atlantic City changed the entire feel of the tournament,” Miceus said. “Being there, watching the men play, we got to see our dance and cheer team perform. We saw some great basketball games… The only thing that lacked was not playing a game. But everything else there made it a great team trip.”

The most special moment of the trip came when freshman Emily LaPointe was named MAAC Rookie of the Year at the MAAC Postseason Awards Show on Wednesday morning. LaPointe, who led the team with 12.5 points-per-game, won the award in unanimous fashion after winning MAAC Rookie of the Week seven times during the regular season. And while the announcement came as no surprise to any, the moment was still unbelievably satisfying for all involved.

“Having Emily recognized was a special moment,” Vulin said. “We all love her and are incredibly proud of her. Every time she has to do public speaking she makes me more proud. She’s a really bright and dynamic young lady who’s also really good at basketball. Every individual award is actually a team award because we really feel the team puts the individuals in a position to be successful.”

Miceus has a lot to smile about looking back on her career. Going from walk-on as a sophomore to a starter as a senior has made for an inspiring story. She leaves the program in a three-way tie for tenth on the program’s all-time blocks list with 71 career blocks.

“Being a walk on, I came onto the team only looking to help. That was my only goal,” Miceus said. “I was able to learn day in and day out even though I wasn’t playing. The Play Green mentality enriches growth. Every year for our underclassmen it’s all about growth so I’m glad that they treated me as a player and not just a walk on.”

Vulin has a lot to be excited about moving forward as she will be retaining a solid core from this year’s team. Health permitting, she fully expects her team to reach even greater heights next season.

“I really feel the last two years have been really emotionally trying,” Vulin said. “Two years, we had three ACL injuries. This past year we had one ACL. We were able to finish fourth and third with all the loss of talent that we had to lose.”

Still, it will take Vulin and her players a little while to get over such a sad and strange ending to their season. The way the Jaspers had been playing of late — having won six of their last seven games — would have made them a tough out in Atlantic City.

“This year I really felt we had a chance to make noise,” Vulin said. “We were playing our best basketball. Our kids were playing at an elite level so I felt bad they didn’t get a chance to continue to show what they had in them.”

About The Quadrangle (1416 Articles)