On March 7, one day before International Women’s Day, the Lasallian Women and Gender Center partnered with Campus Ministry and Social Action to organize a trip to the Leslie Lohman Museum of Art. August Kissel, an international studies major who works as a senior intern for the LWGRC and work study employee for the CMSA, led the trip.

Located on Canal Street in SoHo, the Leslie Lohman Museum of Art is a collective consisting of visual art created by LGBTQ artists. Currently on display are thought provoking galleries titled Working Definitions and Other Points of View, which are composed of avant-garde paintings, prints, and photographs. Many of the pieces were created in the latter half of the 20th century, a time when queer pride was not yet accepted by society. 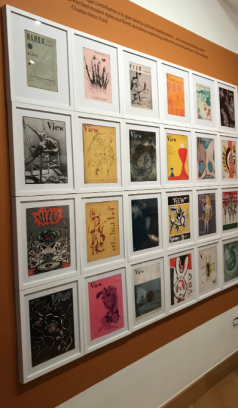 The LWGRC lead a group of students on a trip to the Leslie Lohman Museum of Art on March 7, 2020. JILLEEN BARRETT/ THE QUADRANGLE

The wall label at the front of the museum introduced visitors to the first gallery, reading: “Working Definitions explores the multiple definitions of fluid identities.

Educator from the Learning Center for Arts and Intersectionality at the Leslie-Lohman Museum of Art selected works from the permanent collection that ad- dress the complexity through an intersectional lens.”

Savannah Knoop, the tour guide who led the group throughout the museum, provided information about the museum’s history. She detailed the many people featured in the museum, such as activists, poets, photographers, and representative figures in the LGBTQ community.

However, she also encouraged students to participate by answering questions and thinking out loud about the details of the art. Part of the tour included acting out interpretations of the characters and formulating words to describe the pieces. Some of the words that were suggested by students included demonstrative, emotional, and extravagant.

One of the many historical aspects of the next gallery, “Other Points of View,” was their display of covers from older issues of “View,” a magazine that “queered the modern art world” according to a wall label curated by Tirza True Latimer.

Nicole Diaz and Camryn Holly, juniors and close friends of Kissel’s, were enthused by the opportunity to venture into an uncharted corner of the city for them. Holly was particularly invested in learning about LGBTQ history through the point of view of those with personal experience.

“Truthfully, [I came] because my best friend was leading it, but I also really love going to the city,” Holly said. “I feel like you learn so much more, especially since it’s from the perspective of LGBTQ, I feel like that’s such a different perspective on history and art itself.”

Diaz expanded on that comment, adding that an education on the history of LGBTQ is important for everyone.

“I just love learning about things that I don’t necessarily have the most knowledge on,” Diaz said.

“It’s just great to get another perspective, even if you’re not somebody that’s part of that community but to still be able to learn about it, I think it’s super important.”

Editor’s Note: August Kissel is a Senior Writer for The Quadrangle.