“The Heart is a Lonely Hunter” is a novel that truly makes you think about human behavior. It makes us recognize that what we really desire is someone who will listen to us, who will make us feel like they want to listen to us. Yet, we fail to think about the person who is listening to us. We crave solace and will blindly share our soul to escape having the thoughts in our own mind. Rarely do we recognize the impact all of our thoughts can have when they are being driven into the mind of someone else. The novel shares vignettes of the main characters through the lens of a man who does nothing but listen. 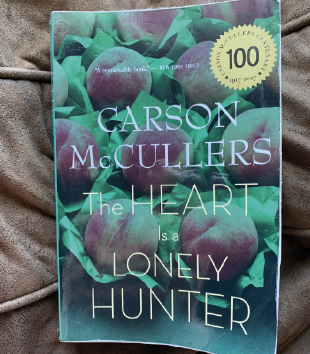 “The Heart is a Lonely Hunter” was Carson McCullers’ debut novel. NICOLE FITZSIMMONS/ THE QUADRANGLE

The first time I ever really fell in love with a book was the first time I read “The Heart is a Lonely Hunter” by Carson McCullers. It was a required reading for my AP English Literature and Composition Class, so I thought it was going to be another novel that I skimmed through quickly at one in the morning the night before—hardly taking in any of the content, hoping I wouldn’t be quizzed on it the day I walked into class. But this novel was different. I still have the same copy I had from the summer before my senior year, which is still covered in scribbles of annotations and underlines.

At just 23 years old, McCullers wrote this novel containing extremely complex and interesting figures. The story is based around a deaf-mute, John Singer, in an old mill town of the South during the 1930s. John Singer embodies a mystery to all of the surrounding people living in the town. He has the ability to read, write and read lips, yet does not like to do so. He is a distant and conscientious character.

The one person that Singer feels comfort with is his best friend, who is also a deaf-mute, Spiros Antonapoulos. Antonopoulos is the ultimate other; he is quite impetuous and his head is frequently up in the clouds. This is very distinct from Singer who is constantly aware of what he is doing, and always has a motive to his actions.

There is a deep admiration that is seen for Antonapolous from Singer, which does not seem to be completely mutual considering the apathetic characteristics Antonopoulos inhibits. This is parallel to the relationship between Singer and the rest of the characters: the lack of mutuality.

The mark of Antonopolous’ character is made when he is sent away to an asylum in the beginning of the novel. All the while, Singer bears Antonopoulos gifts and writes him letters as often as he could, with little reciprocation. After ten years of living with Antonopolous, Singer is forced to pay rent and live in a family’s shared home located in the town.

Singer’s new-found loneliness leaves him looking like a vulnerable target for those around him in the town. Throughout the novel, McCullers introduces the reader to four extremely complex and interesting characters battling with the isolation and struggles they face. Singer’s lack of response leaves the characters around him with a confidant. It is almost as if he is a mere diary to them; he listens, and they share everything. Despite his own sense of isolation, the characters use him as a mechanism to battle their own remoteness.

The reader meets 13-year-old Mick Kelley at the Kelly family home Singer lives in, a young girl who is struggling with finding herself, sharing her thoughts and feelings and growing in her impoverished household that is trying its best to keep going. She uses music as her escape and uses it to battle with the isolation she faces, along with her confidant John Singer.

The next character is Jake Blount, a highly inconsistent and rash character who battles with alcoholism. He goes off on tirades about social injustice in drunkenness, in which Singer simply listens to. He has trouble internally accepting the socio-economic position that he and others in the town have to deal with, and even talks about leading a socialist revolution.

Benedict Mady Copeland is a black doctor and medical professional who has worked in the town for 25 years. During the tense period the novel is set in, he struggles with his desire to mend racial relations. This struggle is intense because of his nobility in working to make personal sacrifices and devote his entire life’s work to furthering the education of and aiding the black community. Besides this internal struggle in which he confides in Singer, he is also ill and his son is physically mistreated in prison.

The most interesting of the characters to me is Biff Brannon. He is the owner of the town’s New York Café, a place where both Jake Blount and Singer both frequently hang out in. It is a lonesome place that dwellers walk into at all hours of the night, yet it is important to the town and the novel. He is generous with all of his customers, including Mick. Despite dealing with tense relations with his own wife, Biff Brannon is one character that is continuously haunted by the fact that he cannot completely understand Singer.

The end of the novel is significant because it leaves the reader with a mountain of unanswered questions. For some this is the most irritating thing an author can do, but it’s something I’ve really grown to love.

New beginnings are laid out as the four characters deal with the loss of the one person they shared their secrets with. I’d like to think that there is hope in the ending of this novel, and that the thoughts they shared with Singer can now face reality as things begin to change completely with a small sense of hope in some strange way. The sun will rise again, and the characters will go on, seems to be part of the message.

Yet it is hard to deny that the ending of this novel is not sorrowful and eye-opening. McCullers’ intriguing take on isolation starts with the surrounding characters but ultimately ends in the greatest isolation of the one who aids the rest. I recommend this novel to anyone who is interested in works of literature that change the way you look at things.

About The Quadrangle (1453 Articles)