The Black Student Union (BSU) of Manhattan College held their first official meeting of the semester on Thursday, Sept. 12 at 7:00 p.m. in the Multicultural Center in Kelly Commons. Many students attended which elated board members and left them scrambling for more seats as curious attendees interested in learning about the BSU’s objective and mission entered the room. 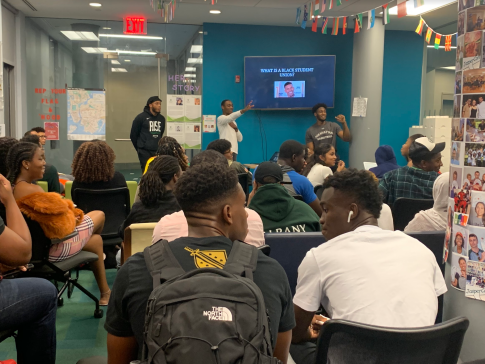 Board members gathered in front of students to introduce themselves as well as to share the purpose and goals of BSU, which included points such as increasing education knowledge, developing political awareness, and encouraging cooperation between BSU members and other organizations on campus and the community as a whole.

The president of Manhattan College’s BSU, senior Pauly Paulicap, addressed how the club wants to erase any impression that the BSU is only intended for African American students at MC.

Casey Monroe, who serves as the BSU planner and coordinator, motivated students to make an effort in achieving the club’s goal of bringing diversity to other school organizations, by joining the student body.

After the board members introduced themselves and explained the purpose of the club, students were asked to participate in icebreakers in which they had to say their name, major and were given the choice to share a hobby, hidden talent or food they would be. Positive energy circulated the room as each student’s share of background information about themselves followed with supportive claps and cheers from fellow attendees listening. Students answers of where they were from varied from states in the tri-state area to different countries like Jamaica. 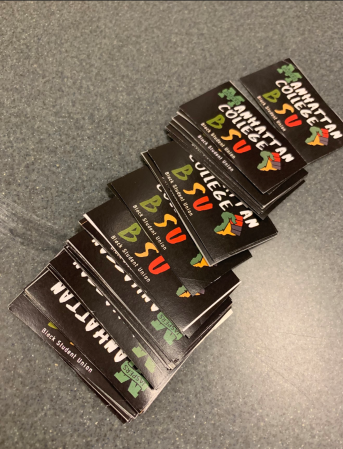 The first BSU meeting of the semester was held in the Multicultural Center of Kelly Commons on Thursday, Sept. 12. MADALYN JOHNSON / THE QUADRANGLE

Recent news headlines involving racial discrimination were also studied and discussed by students. One was about a news anchor who, when commenting on a video of a baby gorilla from the Oklahoma City Zoo, said her co-host (an African American male) looked like the gorilla. Students were distraught when hearing the clip and board members initiated an open discussion about feelings regarding the video.

One student compared the incident to when H&M faced backlash over a black child model wearing a sweatshirt stating, “coolest monkey in the jungle” on their website. The BSU board then asked students if they thought the comment in the video was an ignorant statement, blatant discrimination or both. Many agreed that it was both an act of ignorance and discrimination.

Besides holding conversations on stories focused on prejudice and discrimination, Manhattan’s BSU humored students when playing the trailer of the third film in the “Bad Boys” trilogy, “Bad Boys for Life” which stars comedy legends Will Smith and Martin Lawrence.

Everyone enjoyed watching Smith and Lawrence in action once again and were even more joyed when BSU members brought up the idea of seeing the film as a club when it hits theaters on January 2020.

Senior Kimberly Hall, the BSU’s vice president, shared why it’s significant to her and the other head members that the club gets more recognition and attention from students.

“Me and Pauly and pretty much the whole board are trying to revive it because we couldn’t get it recognized by Student Engagement as an official club.”

Furthermore, she reflected on the ideas BSU is trying to get across to all MC students, especially the ones who don’t think the club applies or matters to them.

“The goal of the club, the idea behind it, is to increase representation on campus, and a common misconception is that you have to be a person of color, specifically, black, to join the club,” said Hall. “Honestly, that’s not true. So that’s what we really want to do, have a sense of more community at Manhattan College, inclusiveness and representation.”

MC students engage in icebreakers at BSU’s first meeting of the semester on Thursday, September 12th, at the Multicultural Center in Kelly Commons.
MADALYN JOHNSON / THE QUADRANGLE

Niasia Boone, senior and treasurer of the club, explained why it’s crucial students join the club and become educated on topics dealing with race and diversity.

Boone justified her reason for joining the club by acknowledging how students can interact with BSU members and, as a result, change how they perceive others.

“If you come and hear things at BSU that you might have had a previous misunderstanding about or you might have thought about a certain group of people in a different way and then you come and learn it’s really not the case and you make new friends, make new connections with people that you may never would have interacted with before,” said Boone.

Jordan Greene, junior and BSU’s promotional manager, pointed out how joining a club like BSU may open doors to networking and make students understand that everyone is human despite how they look and what their ethnicity is.

“I probably say you should join Manhattan College BSU just for the fact that you can network here, with other black people on campus and just the fact you knowing your own race on campus, you knowing people of different color would definitely make someone feel better, knowing we’re all one unit,” said Greene.

About The Quadrangle (1449 Articles)