The cast of Urinetown performed on April 11, 12 and 14 in Smith Auditorium. TAYLOR BRETHAUER / THE QUADRANGLE

In a scathing critique of contemporary American society, coupled with the endless laughs of satire, the Manhattan College Players presented their spring musical, “Urinetown,” in Smith Auditorium on April 11, 12 and 14.

“Urinetown” tells the story of a town in the twentieth straight year of a drought, where private amenities to use the bathroom are unthinkable.  As a result, everyone must pay to use public restrooms, which are subject to arbitrary fee hikes.  Public urination is strictly prohibited, and violators of the law are strictly punished by sending the offender to the mysterious “Urinetown.”

This world is introduced to us by Officer Lockstock (Peter Martino).  Along with street urchin Little Sally (Camryn Kidney), the two characters double as characters in the show and as its narrators, guiding the audience through each scene.  Lockstock is chiefly in charge of exposition, while Little Sally serves mainly to question the logic of the show.

“I like having the ability to talk directly to the audience,” Martino said.  “There’s a lot of fourth-wall-breaking that my character does, and it’s fun because most of the time when you’re performing, you have to pretend like the audience isn’t there.  It’s hard, so it’s nice to play a character where I don’t really [have to] so much worry about that.”

The show opens in the slums of town, where citizens are lining up at Public Amenity #9 for their “morning pee.”  Public Amenity #9 falls under the jurisdiction of Penny Pennywise (Megan Lawlor) who rules with an iron fist and has no mercy for any fee dodgers or violators.  She lays down the law for the citizens in her song “It’s a Privilege to Pee.” 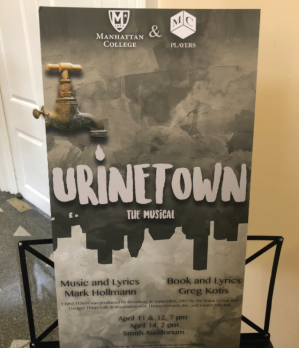 Assisting Pennywise is her assistant, everyman Bobby Strong (Joel Sanson), whose compassion can get him in a world of trouble.  Unfortunately, on the day on which the show begins, Bobby’s father Joseph Strong (Max Toder) is unable to meet the fee.  As a result, he commits the crime of public urination and is hauled off to Urinetown as punishment.

“Urinetown” is Sanson’s first mainstage production with Players, and he was thrilled to play the lead role.

“It was an interesting situation because initially, I wasn’t going to be the main for the show,” Sanson said.  “I think something like a month into the rehearsal schedule, the main had to drop out because he had to focus more on the work he was doing, and they asked me after seeing me … after they saw me in the production for [“The Complete Works of Shakespeare (Abridged)”].  They thought I would be a good fit, so they asked me to step in, and I gladly accepted!”

Details about Urinetown remain a mystery to the townspeople, and the police officers do little to quell the rumors.  In fact, the audience is left wondering about the truth of Urinetown, except, of course, for an untimely outburst from Officer Lockstock in between scenes from the first act.

After Joseph Strong’s arrest, the poor meet optimistic but naive Hope Cladwell (Emma Piazza), off to her first day as a “copy fax girl” at Urine Good Company, a shining beacon of the city … and nepotism.  It is revealed that Hope’s father, Caldwell B. Cladwell (Joseph Weitekamp) is the CEO of Urine Good Company, and is the man behind the curtains when it comes to the oppressive fee policy for urination.

On her way home after her first day, Hope runs into Bobby, whom she tells to listen to his heart in the ballad “Follow Your Heart.”  Despite the stark contrast between Hope’s polished world of Urine Good Company and Bobby’s darker world of Public Amenity #9, the two begin to fall in love.

Because of Hope’s advice, Bobby begins to follow his heart and publicly states his opposition to the urination fees.  He rallies the citizens of the slums and they try to take back the amenities for themselves.  Word reaches Caldwell Cladwell and outright class warfare begins.

The poor are less than optimistic about how everything will turn out, but Bobby remains hopeful and draws everyone together in what was truly the show-stopping gospel number of the show: “Run, Freedom, Run!”  Bobby continues standing up for the poor and their right to “free access,” leading all of the characters to unpredictable and unforeseen consequences by the show’s conclusion.

“‘Run, Freedom, Run!’ is my favorite song, it’s in act two,” said Jennifer Bueti (Senator Fipp). “In my opinion, I love the choreography, it’s one of the best in the show, and then we’re all singing off stage. It’s such a great song and it’s pivotal to the show too.”

Top: The cast of Urinetown in their final scene of the musical, describing their ultimate demise as a dystopian society. This is when every character in the show come to the realization that their way of living is unsustainable. BOTTOM: The two main characters, Bobby Strong and Hope Cladwell, illustrating their star-crossed love. PAUL FUCAO / COURTESY

The long hours and hard work required to put the show together also create a strong bond between the members of the cast off stage.

“The best part of [playing Bobby], I’d say, is just getting to work with so many really good people in the cast,” Sanson said.  “This cast is just nothing short of fantastic.  Everybody plays their roles incredibly well.  It really helps you get into character with how deeply into character everyone gets.  It’s really impressive.”

For freshman student Matthew Blackwood (Tiny Tom), being involved in Players and in “Urinetown” has allowed him to make a close-knit group of friends during his first year of college.

“[My favorite thing] is totally the people, one hundred percent. I’ve made so many friends so fast, and really strong friends,” Blackwood said. “Being in musicals can be very physically draining, but also it leaves that sense of ‘we’re all doing it together and we’re all having fun,’ and we’re all there for each other.”

As “Urinetown” serves as a harsh critique of capitalism and the legal system, Players brought the issues presented in the musical back home to the Smith Auditorium.  Mirroring “Urinetown”’s central conflict of drought and lack of clean water, Players hosted a concession stand during intermission in which all proceeds would be donated to Flint, Mich., a city in the middle of a five-year-long water crisis itself.

“I think that the topics the show deals with are timeless,” said Martino.  “We’ve been dealing with ecological issues for a long time now and also, the show deals with how corporations take advantage of issues for their own benefit and I feel like those are the kinds of things that it doesn’t really matter, you could set that in the ‘20s, you could set that in the ‘30s, ‘40s, ‘50s, basically anytime in history, you can set the show.  That’s why what time period the show is set in doesn’t matter, because the issues that it deals with have been present for so long.”

Sanson is particularly interested in how “Urinetown” serves a larger purpose outside of simply being a musical.

“Urinetown’s an interesting show, because it has a lot of connotations that air toward parody and satire of … musicals and theatre in general, which is a good laugh, especially seeing as it takes so many different aspects of live theatre and just completely turns them on their heads, just for the sake of getting a laugh and pointing out, ‘Hey this is kind of funny that … this kind of thing goes on.  It’s just an interesting show altogether.”

About The Quadrangle (1449 Articles)