While having a night out with his friends, Martin Enright was instructed to only drink claret wine and lemonade. His track and cross-country coach, future hall-of-fame member George Eastment, told Martin and his teammates to do so in order to maintain a somewhat healthy well-being while still being able to have a fun night out. 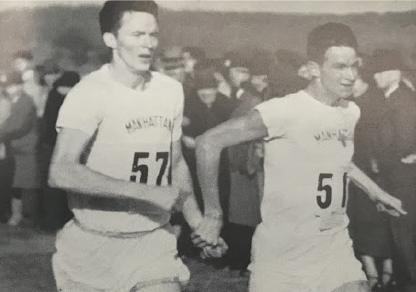 If it weren’t for his athletic scholarship, Enright wouldn’t have found himself being told to drink claret wine. More importantly, he wouldn’t have been a headlining track athlete at Manhattan College or even be at college in general. He was track standout star at Archbishop Malloy High School, and felt blessed to have been awarded a scholarship at Manhattan to continue doing the sport he loved. Enright attended Manhattan from 1948-51 and throughout his career there, helped lead his track team to success. He never imagined that one day his future two daughters and granddaughter would be living out his legacy at the school he once loved.

“One thing about my dad is that he loved his track and cross country and Manhattan College,” Enright’s daughter Sue said. “The college held a special place in his heart and he was so grateful for that athletic scholarship.”

My grandfather Martin, or “Pop-pop” as I used to call him when I was little, met my grandmother Rita, a current phone switchboard worker, at a club one night in the city. The two hit it off, and Rita later found herself spending a lot of time with Martin at Manhattan attending multiple social events.

“It was nice, I had a good time there,” Rita said. “Manhattan College was a lot of fun.”

In addition to track and cross country, Enright was also an active member of the Pi Rho Phi fraternity and had Rita accompany him to events and formals, known as “Tea Dances” that the club hosted. With the amount of time she spent with Martin at Manhattan, Rita was awarded the title of the “Pi Rho Phi fraternity sweetheart.” She was also featured in a 1951 edition of The Quadrangle in which she was a contender for “Queen of the Quad,” a contest to determine the “first lady” of the college considering it was an all males school at the time.

One night, the couple was headed to a Tea Dance at West Point because Enright had friends there that he met through track. While strolling through campus that evening, Rita stopped by the grotto and had her picture taken. My grandmother then began the infamous family tradition of having your picture taken by the grotto.

Rita in front of the Grotto in 1951 (left) versus the two of us at the grotto present day (right). CHRISTINE NAPPI / THE QUADRANGLE

“The campus has given me a lot of memories,” Rita said.

After Martin Graduated in 1951, the two bounced around moving to Queens, Connecticut, back to Queens, and then ultimately to Ridgewood, a small suburban town in North Jersey, where they had five kids. Among them was my aunt Marianne and my mother Sue. By the time it came for their children to start applying to colleges, Manhattan was the only school their daughters applied to.

When Marianne was a Jasper from 1977-81,  she would often pile onto the one train with her friends to watch the Manhattan basketball team play at Madison Square Garden, because Draddy Gymnasium wasn’t built yet. Hundreds and hundreds of Manhattan students filled the train–– everywhere she looked Marianne was surrounded by Jasper basketball fans. Due to the overwhelming Jasper pride present on each subway car, the train didn’t make any stops and went right to the garden to accommodate the Manhattan Students.

One reason why Marianne loved social outings and events at Manhattan was for the strong community bond and inclusive atmosphere the school had.

“I don’t think this has changed today, but everyone really looked out for each other,” Marianne said. “Everyone was included at every place. It was a really fun school to go to.”

From sports events to social outings, and simply hanging out with friends, Marianne had a blast attending Manhattan.Yet through life as a Jasper, she continued to reflect her father’s legacy.

During Marianne’s time at Manhattan, her younger sister Sue would come visit and get a feel for the campus life. After spending a few weekends there, she saw herself as a future Jasper, and ultimately ended up attending the school from 1981-85 because she knew how special it would be for her father.

As Sue was going out with her friends one night, she headed to the Pinewood, a then popular bar on broadway that all the Manhattan kids went to. Little did she know that she would meet my father Chris, a State University of New York Oneonta graduate, and their love would flourish on Manhattan’s campus.

Chris would often pick Sue up at her apartment in Overlook, and they would head to Piper’s Kilt on W. 231st St. for brunch. After many dates, Chris then attended Sue’s college Prom and the rest is history, all thanks to Manhattan.

“It was fun when I would go drive down and see mom,” Chris said. “I was never on campus until mom had invited me to a dance with her and I’m like wow, this campus is really nice.”

Today, there are differences and new additions to campus since Martin, Marianne and Sue were students at Manhattan. The famous Quadrangle and general architecture have remained the same, yet over the years the school has undergone a few changes. The dorms, food, security and amount of diverse activities present on campus have improved since their time there.

One big difference is the fact that the college is now co-ed. It used to be an all male institution at the time Enright attended, and Marianne belonged to one of the first classes of females. Marianne and Sue agree that the most notable difference is the drinking age. Cafe 1853 used to be known as “Plato’s Cave,” an on campus bar that Marianne describes as having a “coffee house” vibe.

“That’s the biggest difference between now and then when we went there, is that the social life really revolved on and around campus because the drinking age was 18,” Sue said.

Something that has remained the same is the supportive community and friendships that have formed while being a Jasper, an aspect which is unique to Manhattan.

In addition to the friendly environment Marianne and Sue found that they weren’t the only legacy students, and that fact continues to be true today. The two describe that “everybody” at Manhattan had some family ties during their time there. Sue notes that five out of her six roommates had fathers who attended school at Manhattan, including siblings that attended also.

In addition to the common familial aspect, Sue also notes of the extensive alumni network the school has.

Something Sue claims that hasn’t changed, is the special feeling one gets when on campus. The general atmosphere has remained the same, even since the time Martin was a student.

“How beautiful that quadrangle is and the campus, that hasn’t changed from when my dad went there. That feeling you get when you’re walking up those steps through the arches, is such a nice feeling and I don’t think that ever changes,” Sue said. “Doing that the last time before graduation was emotional, and even when I took you to visit the school, you just get that feeling walking up those steps.”

When I decided to make the decision to come to Manhattan, I kept my family members in mind.

“It’s pretty special you’ll be at the place not only where your parents met, but also where you’re grandparents met,” Chris said.

Yet I didn’t always think I would be a Jasper, in fact I began my college experience at a different school down in Virginia. After my first semester there I decided to leave, and there was something drawing me to come to Manhattan. The location, size, Lasallian heritage and proximity to the city are all factors that played into my decision making, yet my family history was the most prominent.

“It’s very nice that you’re there and it’s nice for me to be able to come back to campus,” Sue said. “When you said you wanted to transfer schools, I was happy you were considering Manhattan. Of course I was biased, but I knew in my heart you’d be happy there.”

My legacy is part of the reason why I decided to come here. To belong to place with a such a rich family history is a special and comforting feeling. As my mom always tells me, “Your grandfather would be over the moon that you’re here, just thrilled.” To me, that was the most important reason of why I decided become a Jasper, to live out my legacy.

About The Quadrangle (1350 Articles)