This weekend in the Black Box Theater, the Manhattan College Players brought something a bit unusual to the stage: a glimpse at what goes on behind it.

This year’s theme for the club’s annual Cabaret was “Backstage on Broadway,” in which the cast members performed numbers from famous Broadway musicals. The numbers from various shows were all woven together to create a story of what goes on behind the scenes of a Broadway production.

The show was directed by senior Michelle Lapreay, who worked with the cast to quickly put the show together in only a few weeks.

“We grouped people together based on songs that we thought would fit the theme,” Lapreay said. “After that, we basically blocked all of the numbers that we could, we staged them, and then we had Alice come in, the pianist, twice a week-ish to work on harmonies and group numbers and everyone’s solos, and then we put it all together this week.”

Junior Maria Summerville served as the production’s assistant director, which was her first experience with student directing. 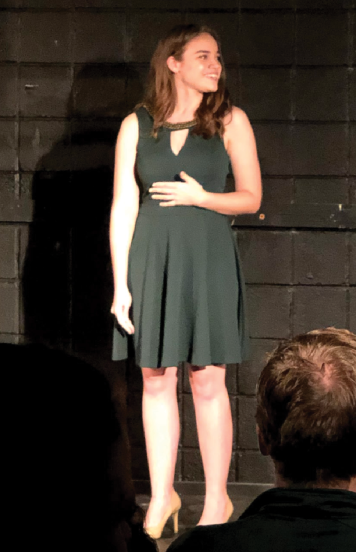 Junior Maria Summerville (above) served as the assitant director of “Backstage on Broadway,” which was her directorial debut. TAYLOR BRETHAUER / THE QUADRANGLE

“This is my first directing experience ever, so it was an awesome experience just because it gave me so much freedom, and gave both of us so much freedom in trying out any idea that we had,” Summerville said. “I think what also made it so enjoyable was the cast and everyone that came out even just for auditions. Everyone came out and had such energy and was so excited to do it because it was just going to be a fun experience and they could tell, and they really came through for us and made it a great experience for us as well.”

With a large group of performers, 27 in total, each having their chance to sing, the Cabaret is a unique show for Players.

“Basically, this semester, this is your only opportunity to sing in Players, so that’s very different.” Lapreay said. “Since it’s a cabaret where it’s not like everybody has to be together [on stage] all the time, it’s a lot more flexible in timing. That’s why we had 27 people in it, because there was so much flexibility time-wise.”

For junior Kathryn Ronan, this was her second time participating in the annual Cabaret. While the Cabaret always has a relatively short rehearsal period, this year she felt especially proud of how quickly it came together. 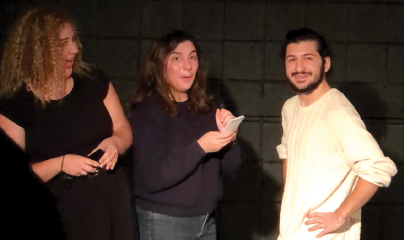 “Last year, I’m pretty sure we had an extra week, so that definitely made a difference in the nerves of everyone because I think we just all felt more prepared,” Ronan said. “This one, we kind of still felt a little bit messy in the beginning of the week, but it really came together. On Monday [and] Tuesday, that’s when we were like, ‘we got this, we could only do this in two weeks, and we got this!’”

For sophomore Camryn Kidney, this was her first time being a part of Cabaret, which gave her an opportunity to try something she usually doesn’t do in a relatively laid-back setting.

“It was really fun,” Kidney said. “I don’t normally do stuff where I sing by myself in front of people because I’m a musician, but I’m not really a singer at all, and so that was different. It’s definitely scary doing that.”

While Kidney has participated in other Players productions, she found Cabaret to be an especially good way to perform a fun number without too much pressure. 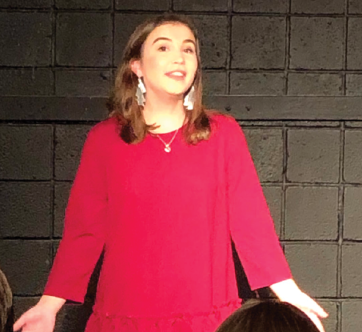 Senior director Michelle Lapreay joined her cast for the final song of the Cabaret. TAYLOR BRETHAUER / THE QUADRANGLE

“It’s different than the mainstage [productions] because those are definitely more high stakes, being done by a real adult director,” Kidney said. “But these are a lot of fun because it’s not as super stressful because it’s student directed. It’s really fun to get to know people because it’s one of those shows that anyone can be a part of, so it’s great to make good friends.”

About The Quadrangle (1369 Articles)