The Manhattan College women’s soccer team entered the 2018 season with lofty expectations after having rode last season’s success en route to a MAAC Championship appearance. In a season that can best be described as “enigmatic,” the program faced no shortage of adversity.

The team’s 2018 campaign endured many unforeseen bumps in the road which resulted in an overall record of 3-8-4, with a 2-5-3 showing in the MAAC. This year’s eighth place MAAC finish can be attributed to a variety of factors ranging from offensive futility, to injury issues, to mere misfortune. 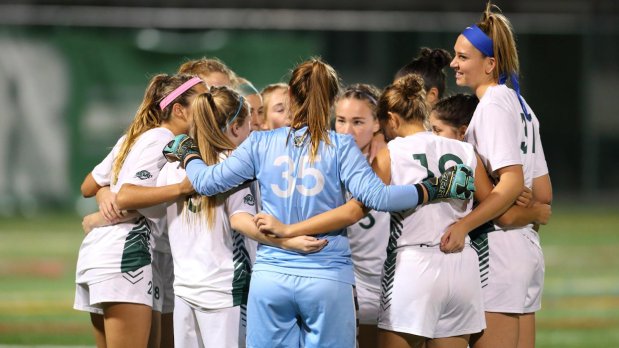 Manhattan’s biggest bright spot was their consistent success in the defensive facet of the game. Their knack for stymieing the opposing attack became habitual as the season wore on and helped keep games tight. Under head coach Brendan Lawler, Manhattan has always been steady defensively. The importance of building a defensive identity is something that Lawler preaches right from day one of training camp.

“Three of our team goals are fight, defensive organization and then what we call winning the moment of transition,” said Lawler. “The team has bought into those things and it really is a team effort.”

The team forced overtime in seven of their 15 games this season; a shocking number that is borderline inconceivable. This number becomes even more perplexing when considering the 2017 and 2016 teams only played two and three overtime games, respectively. The players were mostly unconvinced by the notion that the additional overtime minutes had any bearing on the team’s plummet in the standings. According to some players, the high stakes moments associated with overtime games were more taxing from a mental standpoint than anything else.

“I think it was more of a mental toll if anything just knowing that at most we have to play another twenty minutes,” said junior goalkeeper Camryn Nici.

Sophomore midfielder Bri DeLeo concurred with Nici and believes their experiences growing up had readied them for the physical demands at the collegiate level.

“I think we have all the tools to get our bodies back to where they have to be,” said DeLeo. “When we were younger we used to play tournaments in which we had to play four games in two days. It’s different on this level but I believe it’s more of mental toll because you have to get yourself in the right mindset.”

The reality that most of Manhattan’s games were decided by the slightest of margins leaves Lawler and the players disappointed, yet motivated to come back better.

“It’s motivating that we know what we have to work on in order to make us better and prepare us for those types of situations that we were constantly put in,” said DeLeo.

Lawler is optimistic that his team’s competitiveness is a harbinger for better days ahead.

“It’s frustrating knowing the fact we were right there but couldn’t quite overcome the injuries,” said Lawler. “With that being said, it’s also just as motivating to be so close.”

The Jaspers felt the full effects of the injury bug this season forcing Lawler to constantly shuffle his lineup. The inconvenience of never having everyone at full strength at the same time made it challenging to establish any chemistry. Despite this nuisance, different players were able to showcase their versatility when their team counted on them the most.

“We played 10 different people in the backline, including two different shapes in the backline as well,” said Lawler. “The team has bought into those things and it really is a team effort when people can be interchangeable in those spots and still defend very well.”

Nici and DeLeo, two returning members from the 2018 team, figure to play key roles in 2019 and as veterans will be expected to take on leadership duties.

“Being a goalie I need to be more focal in order to be a better lead communicator,” said Nici. “So I think that’s what I need to improve on the most.”

DeLeo expects every member of next year’s team to lead in some capacity.

“All of us as a whole need to lead and we need to have a short memory of this season,” said DeLeo. “Whether you think it was frustrating or motivating it’s on to the next and dealing with what we have now going forward.”

Lawler is fully confident in Nici and DeLeo’s ability to lead by example.

“I’ve known them for a while through the recruiting process for two-to-four years,” said Lawler. “They’ve developed in pretty much every way whether that be on the field or off the field with their willingness to step up and do what’s needed when asked of them. I think they’ll just continue to develop in the ways they have.”

The end of the season was met with good news as the program received recognition for the strong academic stature of their players. Of the 23 players eligible, 19 of them were placed on the MAAC All-Academic Team. This exclusive club includes MAAC student-athletes who have completed at least two semesters at their respective colleges with a grade point average of 3.2 or higher on a 4.0 scale. Nici and DeLeo, two of the team’s 19 representatives, gave some insight into how they are able to successfully balance the demands of school with their responsibilities as Division 1 soccer players.

“We’ve always been student-athletes throughout our whole lives so it’s nothing that different,” said Nici. “We all want to compete in having a really smart team and competing for the highest GPA on campus and I think we really hold ourselves and each other accountable for our grades.”

“You have a want to do it because you want to be there with your team. In order to do that, the other half of it is wanting to be there in the classroom,” said DeLeo. “Ultimately, they balance each other out.”

Manhattan enters the offseason having learned a lot from this season’s hardships and with renewed hope for a more prosperous future.

About The Quadrangle (1416 Articles)