The Jaspers aimed to avenge last year’s title loss against a Monmouth program that always presents a challenge for Manhattan. On most nights, Manhattan’s ceaseless intensity and defensive cohesion would have produced the desired result. On this night, Monmouth junior forward Dana Scheriff had other plans as her goal in the 99th minute quashed Manhattan’s hopes of eking out a victory.

From the outset, both teams showed a defensive focus that set the tone for a hard-fought battle. Manhattan’s disciplined play and brilliant goal keeping continually fought off the incessant threats of Monmouth’s high-octane offense. Manhattan junior goalkeepers Camryn Nici and Olivia Printy combined for seven saves as they staved off the Hawks’ pressure to give their team a chance. Nici’s four saves marked a career-high. Manhattan Head Coach Brendan Lawler praised his team’s energy and resiliency.

“I’m ecstatic about the effort. The team’s been through a lot,” said Lawler. “We had to cycle different people through a lot of different positions just because of things that have happened to us.”

The Jaspers have been hit with the injury bug this season with a few players currently sidelined. As a result, Lawler was forced to trot out his seventh different starting lineup of the year against the Hawks.

Despite their focused play, the Jaspers’ attack was unable to create any real scoring chances. Monmouth owned advantages in shots (25-1), shots on goal (8-1) and corner kicks (8-1). Monmouth’s pressure continued to intensify as the game approached the end stages of regulation and into the first overtime. In the 76th minute, with a Manhattan defense jammed back into its own box, a scramble in front of the net unfolded, but the shot went wide left. 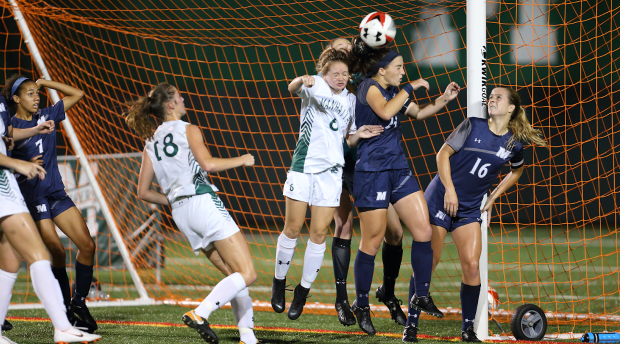 Twenty-three minutes later, Monmouth mustered the game-ending goal to break the scoreless tie. With 17 seconds left in the first overtime period, Monmouth sophomore defender Sarina Jones initiated the attack coming down the right sideline and played a ball that eventually found its way to Scheriff, who knocked her one-time shot into the back of the net to propel Monmouth to a 1-0 victory.

The margin of error against good teams is so slim and the Hawks exploited Manhattan’s defensive letdown on the final sequence. Despite the tough loss, Lawler likes the direction his team is heading in.

“This is an excellent team we played,” said Lawler “A team that beat Rutgers and a team that went into double overtime at NC State. They are the class of the conference and we frustrated them all day until the final seconds. Just very proud of the effort.”

The players insist they are doing everything they can to change the narrative of what has been a tough season thus far.

“We are working really hard and doing a good job staying in it,” said freshman defender Olivia Maldonado. “Everyone’s trying their best no matter where they are playing. We just need to finish our chances and be confident.”

Freshman mid fielder Eve Montgomery added that the effort is there and the team just has to work on some technical.

“Everyone can always improve, but if we are all giving one hundred percent effort then it shows we are trying our best,” said Montgomery. “There are just some technical things we need to work on.”

The Jaspers did show some improvement just a few days later as they shutout the St. Peter’s Peacocks (1-8; 1-2 MAAC) by a score of 2-0 on Saturday, Sept. 29 at the Caven Point Complex in Jersey City, NJ.

The Jaspers return home to host the Niagara Purple Eagles at Gaelic Park on Saturday, Oct. 6 at 1:00 p.m.

About The Quadrangle (1294 Articles)

And for our last (but not least) post of the year, a huge congratulations goes out to our November Quad Member of the Month, Meg Dreher. Meg served as our Editor in Chief for 2019 and has done an amazing job. Swipe to see why we all love her! 📰
And just like that, our final meeting of the semester comes to a close! Thank you to all of our hardworking staff for making this paper a reality every week. Don’t forget to pick up issue 14, on stands now! #wedojournalism 📰
A huge congratulations goes out to our new editor in chief for the 2020 calendar year, former news editor Gabriella DePinho! Thank you to all five candidates who ran and gave their amazing thoughts on the future of the paper! We can’t wait to see what the new year brings! #youdidjournalism 📰
A very happy birthday wish goes out to our assistant production editor, Nicole Rodriguez! Swipe to see why we love Nicole! 🎉🎁
A huge congratulations goes out to our October Quad Member of the Month, freshman student Anna Woods! Swipe to see why we voted for Anna! 📰🎉
Attention, Jaspers! Our special issue, “The Taboo Issue” is on stands now! If you haven’t already, grab your copy from a newspaper rack near you today, but don’t delay, because we’re proud to say they’re already flying off the shelves. #wedojournalism #specialissue #manhattancollege 📰 🤫