Even a first time visitor at An Beal Bocht Cafe will feel like they have been there before.

Between the art-filled walls, friendly staff and mistletoe hanging above the door, the pub has cultivated a homey atmosphere for the Riverdale community. Conversation never ceases, as the lack of televisions brings human connection to the forefront of the bargoing experience.

The cafe’s dedication to the arts is inextricable from its spirits and food: doorways are framed by stage curtains, a prop loft hangs over the bar and musicians and a table is even added to the tiny stage to accommodate patrons during busier hours.

A Riverdale staple since 1991, An Beal Bocht has served as a haven for the arts, featuring a theatre company, poetry nights and most notably, local musicians.

On Thursday, Aug. 23, seasoned regulars took the floor of An Beal Bocht to play for a crowd of Riverdale locals and Manhattan College students.

The band Yas King, a reggae-rooted aspiring pop band, is no stranger to An Beal Bocht’s stage and were the featured performers of the night.

Two out of the five-man band are locals to the Riverdale area.

Lead singer and guitarist Eric Sullivan and bassist Rocky Russo grew up in Fieldston, where they went to high school together, became close friends and eventually co-musicians.

Originally, they started a band together and brought in other musicians, including Seth Nicholson, who is one Yas King’s current drummers and Dylan Chandler, who plays the piano and trumpet for the band.

From there, they played at many venues not only within New York City, but also around the Northeast.

But now with a new member, second drummer Chase McShea, and without some of the originals, they began their new journey and formed a new iteration of their band.

Their six-piece ensemble showcased some of their original songs that consisted of pop, alternative, rock and of course, those light-hearted reggae tones.  No instrument was left behind and the audience was able to hear and take in each of their unique sounds. 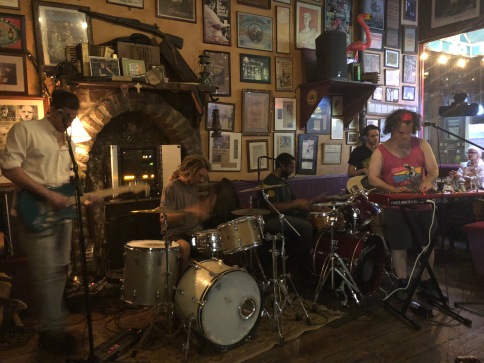 Yas King performing at An Beal Bocht cafe for a crowd of Riverdale locals and Manhattan College students on Thursday, Aug. 23. MEGAN UY / THE QUADRANGLE

An Beal has always been a home for their art and they’ve never stopped coming back to it.

It was obvious that they were and have been loved by neighborhood locals by the immense amount of support they were receiving.  Friends of the band were constantly on the side cheering, people were up and dancing, and at the end of their sets, and dedicated hometown fans were there to express their love for their music.

“We’ve been dipping in and out of some songs we know,” said Sullivan before taking a break. A collection for the band was passed around at the set break as the crowd moved outside to the picnic tables. Bare feet rested on the benches and small dogs enjoyed the excitement. The comfortable, relaxed atmosphere served as a perfect home to the music of the night.

Javi Diaz, another native to the neighborhood, brought his singer-songwriting talentsW to An Beal’s Open Mic night.  Attorney by day and musician by night, he continues to pursue his love for music, even just as a hobby, because it’s what keeps him sane.

With just him and his guitar, he filled the bar with his soulful and gentle yet captivating voice that kept everyone’s attention focused on him.

After performing on many different stages, he still finds himself coming back to his stomping grounds and doing many of his gigs at An Beal.

“I love it.  Everybody’s great.  This is always a reliable and great time.  Right now, my pre-K teacher is here and I’ve known her since I was four years old,” said Diaz after his set.

The hometown feel, support and passion is obviously what fuels these local musicians on coming back to An Beal and giving their people what they have to offer. Clearly, this bar is doing something right and inspiring in the music industry, even if it may be on a smaller platform.

The pub’s connection to the music scene does not end with the performers.

Keith McDermott, bartender at An Beal Bocht, played guitar in the band during one of its earlier iterations, Rocky and the Pressers, before becoming a teacher. McDermott has worked at An Beal Bocht on and off for 11 years.

“There’s no better place to be,” said McDermott, taking a brief break from the bar. “I love the live music, that’s what brought me here in the first place. Now I book the music, so I get to kind of foster it, help it grow. It’s something I love to do.”

An Beal Bocht features live music five to seven nights a week of all different types, featuring not only local musicians but traveling musicians from Ireland and other countries.

The scene has grown throughout McDermott’s time at the bar, as bigger names have made it a destination in New York City. The bar’s Irish roots have also contributed to its rising popularity with an international crowd.

Manhattan College students have their own presence in the music scene, as many open mic performers will be invited back to perform at other times of the week.

An MC alumni himself, McDermott first became involved with the bar during his time at the college, although the music scene was not as much a part of college life as it is today. McDermott cites the MC community as a valuable part of the community despite its role as more than just a college bar.

Music may be An Beal Bocht’s most prevalent connection to the arts, but it also serves as a haven for art and poetry. The back room features different artists of varying mediums once a month, many of whom also play music at the bar. Suzanne Hochstein, local musician and artist, puts on an art show every year in addition to her involvement in the theatre company and live music nights.

“We’re lucky in this neighborhood to have people with a diverse array of talents and they can come here and showcase them,” said McDermott.

The best part of An Beal Bocht? If you ask McDermott, it’s the diverse mix of regulars and travelers that frequent the bar.

“We become like a family…We try to have a homey, welcoming feel, so if people are feeling comfortable then we’re doing what we want to do,” he said.

About The Quadrangle (1441 Articles)

Please read the statement from The Quadrangle regarding our stance on the student government election. ———————————————————- The Quadrangle would like to remind its readers that we are continuing our tradition of not endorsing any individual candidates or parties in the Student Government election. We have not, at any point in this election process, been in conversation with any party regarding any of their policies or plans. We encourage all students eligible for voting to vote and to vote for the candidates they believe will serve the Jasper community best. We look forward to reporting on the election results and to reporting on what new initiatives the elected executive board pursues in the following academic year. The Quadrangle is a student-run paper that seeks to serve the entire Jasper community - current students, faculty, staff and alumni - by giving college news and telling the stories of our entire community. Though we are funded by the college, stories are written and edited by students with no outside input from faculty and administrators. If any student would like to join our staff, we would be pleased to have you. We invite all readers to have a voice in our paper by submitting an opinion-editorial piece to thequad@manhattan.edu. Profanity, vulgarity and hate will not be published. The Quadrangle reserves the right to not publish a submitted letter or opinion-editorial piece.
Dear Manhattan College Community, We hope you all are safe and your health is well in this difficult time of your college careers. To our seniors, we send you support in this moment of uncertainty and disappointment. The tremendous work you have completed as students, athletes, and members of other clubs and activities, will not be defined by this moment; but by the growth you have experienced in yourselves and the growth the college community has experienced as a result of your work. We will continue our commitment to keeping the college community informed, and we will continue pursuing the highest quality journalism we can offer. Continue to regularly check our website for updated stories, as we will be posting online exclusively for the remainder of the semester. Our Editor-in-Chief, Gabriella DePinho, has written a letter to the community as a response to yesterday’s developments.
Dear Readers, I hope wherever you are that you are safe, staying healthy and taking care of yourselves. The news of the move to online classes and the request that students leave campus has impacted everyone in a variety of ways. This decision, though the right and cautious one, has especially impacted The Quadrangle. It is with some sadness that I inform you we will not be putting out a print issue on March 24 and that the fate of our March 31 issue is currently unknown. Our print product is so special to all of us and we will miss having that out in your hands. However, we are not shutting down for these next few weeks, we are simply adapting. We believe the people of this campus community need to be kept informed, that new stories are cropping up out of these circumstances and that we are your best option for staying up to date. We will continue to report and write about the issues the campus community faces and the amazing things people in our community continue to do. For the time being, The Quadrangle will be an online only publication. When the college decides to return to in-person classes and everything is up and running again, we will be in print again. For now, we will be advertising each new story on our social media accounts and we encourage you to check our website every few days to see updated content. It would be easier for us to stop operating all together, but we see this as an exciting challenge. It is a challenge for us to prove to you, our dear readers, our commitment to delivering the news to you in a timely fashion. It is a challenge for us to get creative in our reporting and storytelling. It is a challenge for us to rise and be the best we can be. Thank you for reading. Thank you for trusting us to deliver the stories of our community to you. We will not stop doing journalism. Sincerely, Gabriella DePinho, Editor-in-Chief
We’re proud to announce our newest Quad Member of the Month, @jessica.mckenzie ! Swipe to see what her fellow Quad members had to say!
Want to know what the Quad has been busy working on this week? Guess you’ll have to visit a stack when Issue 5 goes on stands tomorrow!
Attention Jaspers! Looking for a Valentine’s Day date? The Quad’s got you covered! Pick up our latest issue (on stands now!), scan the QR code found on p. 3, and let our matchmakers do the work through the month of February! #VDay#thequadrangle