On the night of April 27, 2018, Manhattan College hosted its third annual fashion show. The evening was filled with originally constructed garments, styling by individuals, as well as, performance art.

The show was broken up into three different sections throughout evening, showcasing a total of eight distinct artists with many more performers and artists.

In the first section, three fashion designers were highlighted. The first out of the gate was designer Malik Grant ‘17. HIs collection was based on his apparel company ApexHats. To help showcase this, he styled his models very simply with denim jeans and plain white t-shirts, allowing the hats to stand out from the outfits themselves and highlight the product.

After the last of his looks walked the runway, Grant said, “Thank you to my models, they always come through when I need them.” 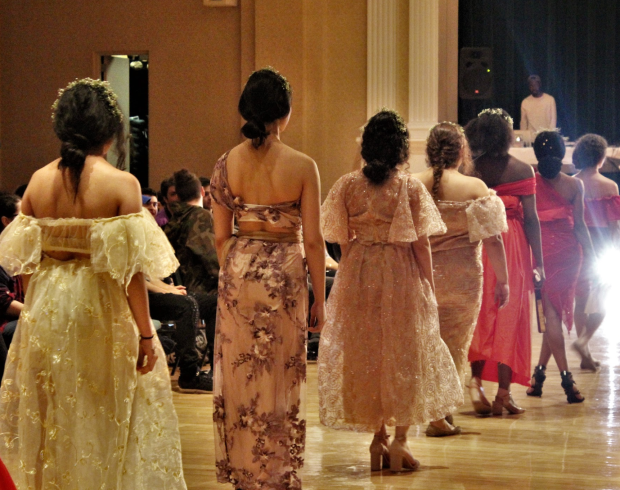 Lola Ayodele ‘18 showed off her collection (above) at this year’s fashion show. Ayodele’s style focuses on fabrics and colors, making fashion for all sizes, skintones and shapes. Her student models have worked with her for many fashion shows. ANJA POLLOZI / THE QUADRANGLE

The second designer of the evening was Lola Ayodele ‘18. Her collection was entitled The Woman and featured an all-female model cast to go along with it. With six looks in total, the collection carried an overall feel of a transformation. It began with two white outfits, beautifully constructed to show off he female figure and body. It then transitioned to a shade of light pink, then a dramatic change to a dark and bold red. The sense of female empowerment could be picked up easily with every outfit that walked down the runway

“The line was about inclusion,” said Lola, “and I wanted to represent as many women as possible.”

Rounding out the first three designers was Cristian Mena ‘18. It had a slightly different vibe compared to the designs that came before. It was a very wearable and sporty collection that made it feel like you could pick it up and wear it right off the runway.

The collection was named Dulcis, which became very apparent with the graphic print of the name on the various t-shirts, sweatshirts, and jackets in the collection. There was also a cool design where there were longitudinal and latitudinal coordinate designs on the various pieces that added variety and creativity to the collection.

After a brief intermission, the second of three sections began. Comprised of stylists and performances, the section allowed for a nice change in pace compared to the first section, but not completely departing from the vibe of the entire event.

The first stylist to show was Cedric Louis ‘20. His showcasing was very fun and flirty with a springtime flair. It was colorful and like much fo the other collections in the event, employed female power and models with swagger and confidence. The audience was very energetic and supportive throughout the evening. All of the models who walked the runway are also MC students. ANJA POLLOZI / THE QUADRANGLE

With this showcase in particular, the audience began to really get into the groove and was excited about what was being shown on the runway, making way for a wonderful night.

The second of three showings in the section was a performance. It was a dance number that was definitely a bit of a change from what had previously been shown in the evening. Stylistically it was a departure, the previous collections and showing were very much colorful, fashion forward, and bold.The styling of the dance routine was not necessarily the same, but does not mean that it was a negative.

Overall, it had a bandit theme with a red bandana covering the lower half of the dancers’ faces. They wore simple outfits, black pants, black jackets, and white shirts, allowing the dancing and performance overall to shine through the most. This performance really got the energy flowing through the audience, that would carry through the final showings of the evening.

The final part in the section was another showing of a stylist. Christopher Santiago ‘20 had a showing consisting of many bold colors, prints, and design inspirations. There was a bit of performance factor at the beginning, but the highlight of his time was the clothes themselves. The color pallet was very bold, following the sense of springtime that could be felt throughout the evening. Multiple influences and style choices could be seen from business casual wear, East Asian prints, and bohemian vibes could all be seen.

Rounding out the evening was the final two designers, the first of which was Joey Serulle ’18 with his collection Simplexity. The evening was filled often with sporty and fun casual wear that could be worn every day, and this collection only added to that. Its bold colors made impact statements out of articles of clothing that may otherwise not be so highly elevated.  It was cool that during the second half of the collection, the models began walking the runway side-by-side in pairs, which was something that was not done the entire night, changing up and adding something new to the event as a whole.

The final showing was of designer Mukiyanna Kamara ‘18. She had one of the smaller collections but it surely packed a punch. Her well-constructed garments brought a level of sophistication to the event that elevated the whole evening . Her first garment that walked down the runway was one of the show-stopping pieces of the evening.

Liza Talakvadze walked down the runway in a green lacey dress that exuded femininity, confidence and power.

“Seconds before I was going to walk, I felt like I could almost black out. But when I hit the runway, I just felt this total sense of empowerment,” Talakvadze said.

Overall, the evening was a success at showcasing some of the talent at Manhattan College. The student engagement and audience interaction was a testimonial to how much fun and enjoyment came from the event. And for the designers, it was a wonderful opportunity to show their talent that may go unseen otherwise.