One of America’s most celebrated writers, Ernest Hemingway, lived an ideal life according to most: his life was full of adventure, he was married four times and most importantly, he was a very fine writer.

The life of Hemingway seemed to shock the world when in July of 1961, Hemingway awoke in his Idaho home, picked up the double-barreled shotgun he often used to shoot pigeons, placed the twin barrels against his forehead, pulled the trigger and ended his own life.

From the outside, Hemingway seemed to have it all. However, to this day, no one can quite put their finger on his reason for suicide. While a variety of reasons have been held responsible, such as alcohol dependence, bipolar disorder, depression brought on most likely by his father shooting himself and traumatic brain injury, among other reasons, no one is certain why Hemingway suddenly ended his life.  Those closest to Hemingway were puzzled by his death, and even those closest to him did not see it coming.

While her book does not give an answer behind Hemingway’s motive for suicide, American author Paula McClain’s novel “The Paris Wife” explores a fictionalized account of Hemingway’s relationship with his first wife, Hadley Richardson. While this book may be deemed fiction, there was clearly a lot of research done on McClain’s part, because the novel is historical in nature and closely parallels real events, making every single moment in this story feels more real than it does fake. 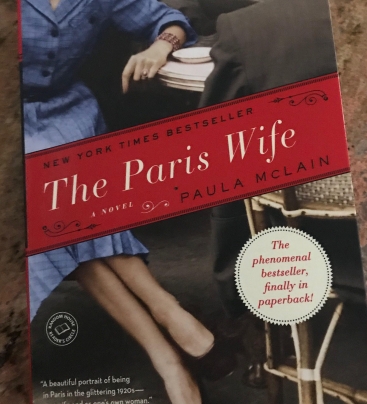 “The Paris Wife,” a historical novel by Paula McLain, was published in 2011. RIKKILYNN SHIELDS / THE QUADRANGLE

When Hadley and Hemingway first met, Hadley was a twenty-eight-year-old woman who had already given up on love. Meeting Hemingway, however, flipped her world upside down. The two quickly married and moved off to Paris so Hemingway could begin his career as an author, rather than continuing to write for local newspapers.

Throughout the novel, we see the constant struggle between Hemingway, attempting to find his voice while writing and eventually publishing his first novel, The Sun Also Rises, while Hadley is struggling to find her voice as a wife and muse to Hemingway.

Surrounded by a variety of other American writers and artists living in Paris at the time of the Jazz Age, such as F. Scott Fitzgerald and Ezra Pound, Hemingway’s work soon began to take a toll on not only his own life, but also his marriage with Hadley.

“The Paris Wife” follows Hadley and Hemingway through both their individual and combined trials and tribulations. Ultimately, the two have to face the ultimate crisis of their marriage, an event that may crush the relationship they have spent so long fighting for.

While as a reader, you may have no burning interest in the life of Ernest Hemingway, this novel is not only for his fans. Rather, this novel is for anyone interested in reading a tale of love and the end of loyalty.

This fictional account of Hemingway and Hadley’s relationship is full of rich and true history, beautifully described scenery and an amazing timeline of events. In the end, Hemingway writes that he would rather have died than fallen in love with anyone but Hadley, and even dedicates his first novel, The Sun Also Rises, to Hadley and their son.

About The Quadrangle (1344 Articles)