An unseasonably warm February evening – the unfortunately fitting backdrop for noted climatologist Ben Santer’s lecture on the evidence supporting the scientific consensus regarding human-caused climate change, which took place on Feb. 20 before a packed crowd in the Rodriguez Room in Miguel Hall.

According to Kalob, he first encountered Santer while at the New York University Faculty Resource Network’s Winter 2017 seminar which took place in early January in Athens, Greece. The seminar, which dealt with climate change, was led by Santer.

“I got to know him and he mentioned to us that he had been invited to go on Late Night with Seth Meyers [during the week of the lecture – editor’s note: the episode aired on Feb. 22, 2017],” Kalob said. “I said to him, ‘Ben, if you’re going to be in New York, could you come here?’”

“This is the kind of issue that should be studied in all Catholic schools in some systematic ways,” Kalob explained as his rationale for inviting Santer to speak at Manhattan. “When people are not properly informed, they can be susceptible to any kind of information that’s out there. And bad information is often worse than no information.”

Despite his busy schedule and much to Kalob’s surprise, Santer accepted the opportunity to discuss climate change at the college. 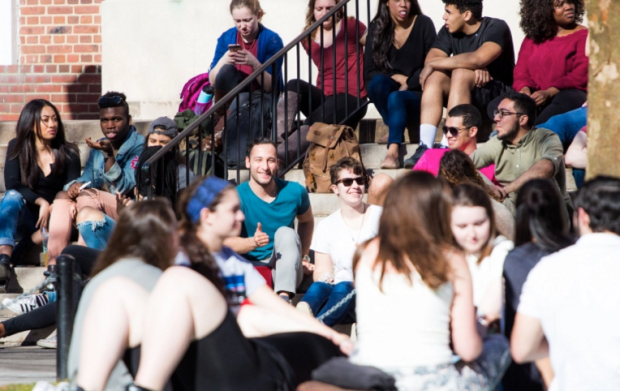 Without an empty seat in sight, the mild-mannered and soft-spoken climatologist laid out a brief yet expansive crash-course on the scientific evidence that has, in many ways, become his life’s work; however, Santer explained that his love-affair with climate science and statistical analysis was, ironically, the result of “pure chance.”

“I was working in Germany for an aerospace company in the early 1980s,” Santer recalled. “They had a contract with the German government entitled ‘The Socioeconomic Impacts of Climate Change.’”

Having studied environmental science as an undergraduate student, Santer was assigned to work on the contract and was tasked with utilizing climate computer models in order to evaluate the impact that climate change would have on crop yields in Europe.

“I was fascinated,” Santer said of the initial experience. “The idea that people would and could try to capture, in numerical form, the complexity of the climate system was fascinating and I knew that’s what I wanted to do.”

In response, Santer sought to enter into a Ph.D. program in climatology; in 1987, he succeeded in achieving that goal when he received his Ph.D. from the Climatic Research Unit at the University of East Anglia in Norwich, U.K.

30 years later, Santer now finds himself travelling across the country and across the world, delivering roughly “25 to 30” lectures per year to a myriad of different audiences of differing viewpoints on the issue of climate change.

“One of the things I’ve tried hard to do is not just preach to the choir, not just speak to my peers but speak to people who are skeptical about me and everything my colleagues and I do and have learned, the climatologist said.

Santer continued by saying, “I spoke in Southern California to the Pacific Club, a very [politically] conservative organization, the Jonathan Club – the most exclusive club in Los Angeles, Bohemian Grove – which is referred to as ‘summer camp for billionaires.’” 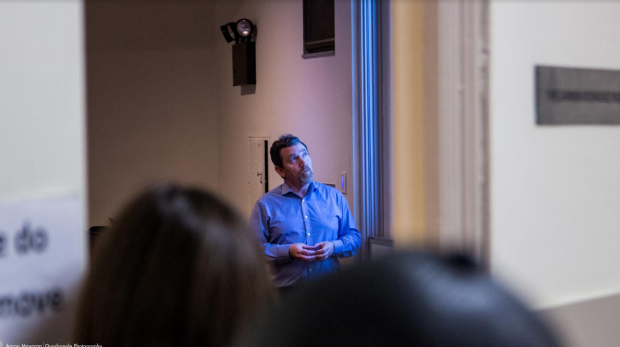 Although he may have found himself in sometimes precarious positions while speaking to individuals who may be potentially dismissive about the implications of his work, Santer considers such talks to be invaluable opportunities “to give people pause for thought…[about] the consequences for everything you hold dear of being on the wrong side of the science.”

During his lecture in the Rodriguez Room, Santer gave the same type of talk as he did the members of Bohemian Grove. In it, Santer stressed that climate science is more than just an “either/or proposition” and that Earth’s climate has been affected by both natural causes – such as solar and volcanic activity – and human-made causes like deforestation and increased carbon emissions emanating from widespread industrialization.

However, he made it clear that human activity has put Earth’s climate in a perilous position, citing the fact that atmospheric carbon dioxide levels have reached the 400 parts per million milestone for the first time in four million years and that it appears unlikely for those levels to decrease below this historic threshold in the foreseeable future. Furthermore, the climate scientist also dedicated some of his lecture to debunking some of the arguments commonly employed by climate change skeptics and denialists.

Chief among them was the assertion that climate change can be attributed solely to increased solar activity; Santer explained to the audience that, if this were the case, the upper atmosphere would have experienced significant amounts of warming, according to climate models. Yet the data indicate that the opposite is occurring while the oceans, land surface and lower atmosphere have all experienced significant average temperature increases.

While his Jasper audience appeared receptive to his arguments, for Santer, this wasn’t always the case.

In 1995, Santer served as the lead convening author of the climate change attribution chapter of the United Nation’s Intergovernmental Panel on Climate Change (IPCC)’s Second Assessment Report. It was here, in this report, that the international scientific community recognized the connection between human activity and climate change for the first time when it concluded that “the balance of evidence suggests a discernible human influence on global climate.”

That, now seemingly innocuous and, in Santer’s words, “infamous,” twelve-word phrase became the subject of controversy around the time of the report’s publishing.

Prior to the report’s publishing in 1996, the Global Climate Coalition, a pro-business lobbyist group that advocated against reductions in greenhouse gas emissions, circulated a report of their own entitled “The IPCC: Institutionalized Scientific Cleansing.”

Distributed to members of Congress and to prominent media organizations, the report accused Santer and his co-authors of “suppressing evidence that would support those skeptical of the greenhouse theory.”

These allegations were echoed by Frederick Seitz, a prominent climate change skeptic and former president of the U.S. National Academy of Sciences, who asserted in a June 12, 1996 op-ed for the Wall Street Journal that he had “never witnessed a more disturbing corruption of the peer review process.”

In response, both the American Meteorological Society and the University Corporation for Atmospheric Research came to Santer and his colleagues’ defense stating in a July 15, 1996 joint-letter that said that “there appears to be a concerted and systematic effort by some individuals to undermine and discredit… scientific results with which they disagree.”

Despite the attempts to undermine the report’s credibility, the 1995 report’s findings were ultimately accepted at the United Nation’s 1996 Climate Change conference in Geneva, Switzerland.

Pamela Chasek, Ph.D., government department chairperson and co-founder of the “Earth Negotiations Bulletin” which tracks international environmental policy, remembered that “delegates were citing the [1995] report as the impetus to push towards…what became the Kyoto Protocol the following year.”

More than 21 years after the fact, Santer maintains that the push-back against the IPCC’s Second Assessment Report was to be expected, saying that the report’s conclusion was “way too far for some of the folks who wanted to embrace uncertainty for as long as they could.”

“Regardless of how carefully folks tried to couch that ’95 conclusion… irrespective of who had been involved, how carefully people had worked on that report, very, very powerful forces would not have liked that finding and would have done everything in their power to discredit the finding, the process, and the people involved,” Santer added. “It was kind of inevitable, looking backwards, that this would happen.”

In the long run, Santer was the one who’s work was validated. In 1998, he was one of the recipients of the MacArthur Fellowship – also commonly referred to as the “Genius Grant” – for his work in climate science while the Global Climate Coalition dissolved in 2001 as it became evident that the link between greenhouse gas emissions and climate change was irrefutable.

Looking forward, Santer expressed some excitement about making his late-night television debut on Meyers’ program although he did find himself taking suggestion from the audience on how he should interact with the Saturday Night Live alum.

Although he doesn’t typify the traditional late-night television guest, Santer surmised that his invitation to appear on Late Night may be connected to a claim made by Senator Ted Cruz, Republican of Texas, on the show regarding satellite data.

“Senator Cruz made a specific claim that satellite data showed no significant warming over the last 18 years, and my colleagues and I did the research to address that claim and showed that it was wrong and showed why it was wrong, so I suspect that this is an attempt by Seth Meyers to set the record straight,” Santer contended, connecting it to a greater trend he sees in media where news outlets are attempting to “represent the true consensus in our field better.”

Amidst fears that the Trump administration may potentially end U.S. involvement in the landmark Paris Climate Agreement – which aims to keep global average temperature increases below two degrees Celsius through ambitious carbon emission reductions, Santer remains optimistic about the future although he is fiercely opposed to the possibility of an American withdrawal from Paris, which entered into force in October 2016.

“I think it would be an epic fail, to use my son’s language, if we decided to tell the rest of the world you’re on your own,” Santer opined. “And historically, we are responsible for the lion’s share of emissions so it would be a complete abdication of our historical responsibility of the problem… [and there exists] a moral and ethical imperative to protect the environment.”

Kalob struck a similar tone when speaking about not just American responsibility but also Catholic responsibility in tackling climate change saying, “In the Catholic Church, we have Laudato Si [Pope Francis’ encyclical on the environment] which is very clear. We’ve got to care about God’s creation. That’s our responsibility… and we have to address it from our individual actions to political decision-making.”

Adam Grippo, a third-year environmental science student, disagreed with the optimism expressed by Kalob and Santer. “I don’t think we are ever going to fix this. I think we can mitigate the damage as much as possible…[but] I think the real [climate] refugees are coming.”

Although Grippo qualified his statement by saying that he lacks the expertise on the subject as an undergraduate student, the fear of there being an influx of climate refugees on the horizon is a genuine one. Estimates have ranged wildly from anywhere between 25 million and 1 billion climate refugees, while the most-commonly cited statistic has been 200 million climate refugees by 2050, a metric that is courtesy of the International Organization for Migration.

Ultimately, Santer believes that there are two paths for humanity to go down: a “business-as-usual” path where carbon emissions continue on their upward trajectory – an outcome which may result in an average temperature rise of four degrees Celsius by 2100 – or an “enlightened humanity” path wherein atmospheric carbon dioxide levels stabilize at around 500 parts per million and global average temperature increases are kept beneath two degrees Celsius.

For Santer, the key to ensuring that society goes down the “enlightened humanity” path: informing oneself. “I think what we need in the United States is respectful dialogue… In my opinion, we all lose if, as my wife would say, we are in the ditches. We’ve dug ourselves so deep in the ditches on either side of the road that you can’t see each other anymore. That’s not a way of solving problems and I don’t want to be in the ditches.”

Leaving the audience with a parting thought, Santer concluded his lecture by saying: “In the real world, there is no control run. We only have one planet and one shot.”