With the semester winding to a close, it has been almost a full academic year since the opening of the Raymond Kelly Student Commons. 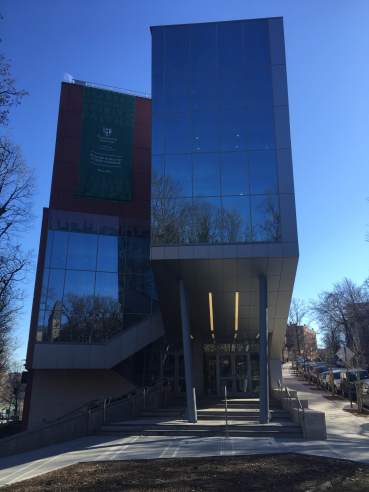 The commons is also the first building at Manhattan College to receive a LEED certification, making it the most sustainable and environmentally friendly structure on campus.

But as with any change, the commons has taken some getting used to.

“It takes a while on a new building to shake everything out, so to speak,” Richard Satterlee, vice president for student life, said.

The idea for the commons began with the desire to shift Manhattan College from a school with a high commuter population to a more residential institution. In order to do so, the college built new dorms, such as Lee Hall in 2008, and the parking garage, but there was still a missing piece.

“We became majority residential, and we had the bedroom space in our house but not the living room space,” Satterlee said.

Since its opening, the commons has provided students with such a casual gathering space and is the new home for many of the campus’s clubs and organizations, including Student Activities, the Multicultural Center and the Social Action Suite.

John Bennett, the director of student activities, believes that all clubs have benefited from the opening of the building, but there are still some growing pains.

“Down the road, we have to figure out the ebbs and flows of the building itself, but it’s definitely better today than it was in the beginning of the school year” Bennett said.

The commons sees most of its action during the two activity periods: Tuesday afternoon and Wednesday at noon.

Club spaces at the end of the hall on the fourth floor are always open and do not need to be requested. However, if a club wants to use a conference room or the Great Room, they must put in a request in advance.

“When the general manager of the Yankees came to campus, or the fraternities and sororities put on an event in those rooms, it attracts a lot of students and attention,” Bennett said.

The first and second floors have a constant flow of students because of dining services, especially Starbucks, and the campus bookstore. With the recent opening of the game room, the first floor will only get busier.

“It’s always packed when I come here in between classes during the day,” junior Lauren Sciarrotto said. “I didn’t realize what the school was missing as a freshman and sophomore, but now I cannot picture the school without the Kelly Commons,” she said.

While the second floor is often a quieter space used for studying, the social action suite is beginning to show a lot of life.

“It’s a visible symbol of things that we really think are an important part of campus and student life,” Satterlee said. “Before it was less noticeable, so it’s been a really good shot in the arm.”

Another installment of the commons that has been a big success is the new fitness center located on the third floor. Previously, the only gym on campus was located in Draddy Gymnasium.

“The athletes were being shortchanged and the rest of the student body was being shortchanged, so having the new fitness center with state-of-the-art equipment provides a great service and opportunity for students,” Vice President of Facilities Andrew Ryan said.

Chris Policastro, director of the fitness center, has initiated new programs that will encourage students to exercise and partner with nutritionists at Gourmet Dining. Policastro is also training students to teach yoga and other classes in the mini gym.

The commons has also provided a link between the schools’ north and south campuses.

“Now you’ve got a stop-off point in the middle for socialization,” Ryan said. “Learning does not just happen in two campuses, learning also happens in an environment like this.”

The commons may only be a year old, but students and faculty are already thinking about its role in the future.

“I would love to see more events that will attract all different people from the school,” Sciarrotto said.

He said one of the best parts about the commons is that it allows students to make it what they want going forward.

“The flexibility of the building and the opportunity for great programming leaves it open to students to do what they want,” Satterlee said.

Please read the statement from The Quadrangle regarding our stance on the student government election. ———————————————————- The Quadrangle would like to remind its readers that we are continuing our tradition of not endorsing any individual candidates or parties in the Student Government election. We have not, at any point in this election process, been in conversation with any party regarding any of their policies or plans. We encourage all students eligible for voting to vote and to vote for the candidates they believe will serve the Jasper community best. We look forward to reporting on the election results and to reporting on what new initiatives the elected executive board pursues in the following academic year. The Quadrangle is a student-run paper that seeks to serve the entire Jasper community - current students, faculty, staff and alumni - by giving college news and telling the stories of our entire community. Though we are funded by the college, stories are written and edited by students with no outside input from faculty and administrators. If any student would like to join our staff, we would be pleased to have you. We invite all readers to have a voice in our paper by submitting an opinion-editorial piece to thequad@manhattan.edu. Profanity, vulgarity and hate will not be published. The Quadrangle reserves the right to not publish a submitted letter or opinion-editorial piece.
Dear Manhattan College Community, We hope you all are safe and your health is well in this difficult time of your college careers. To our seniors, we send you support in this moment of uncertainty and disappointment. The tremendous work you have completed as students, athletes, and members of other clubs and activities, will not be defined by this moment; but by the growth you have experienced in yourselves and the growth the college community has experienced as a result of your work. We will continue our commitment to keeping the college community informed, and we will continue pursuing the highest quality journalism we can offer. Continue to regularly check our website for updated stories, as we will be posting online exclusively for the remainder of the semester. Our Editor-in-Chief, Gabriella DePinho, has written a letter to the community as a response to yesterday’s developments.
Dear Readers, I hope wherever you are that you are safe, staying healthy and taking care of yourselves. The news of the move to online classes and the request that students leave campus has impacted everyone in a variety of ways. This decision, though the right and cautious one, has especially impacted The Quadrangle. It is with some sadness that I inform you we will not be putting out a print issue on March 24 and that the fate of our March 31 issue is currently unknown. Our print product is so special to all of us and we will miss having that out in your hands. However, we are not shutting down for these next few weeks, we are simply adapting. We believe the people of this campus community need to be kept informed, that new stories are cropping up out of these circumstances and that we are your best option for staying up to date. We will continue to report and write about the issues the campus community faces and the amazing things people in our community continue to do. For the time being, The Quadrangle will be an online only publication. When the college decides to return to in-person classes and everything is up and running again, we will be in print again. For now, we will be advertising each new story on our social media accounts and we encourage you to check our website every few days to see updated content. It would be easier for us to stop operating all together, but we see this as an exciting challenge. It is a challenge for us to prove to you, our dear readers, our commitment to delivering the news to you in a timely fashion. It is a challenge for us to get creative in our reporting and storytelling. It is a challenge for us to rise and be the best we can be. Thank you for reading. Thank you for trusting us to deliver the stories of our community to you. We will not stop doing journalism. Sincerely, Gabriella DePinho, Editor-in-Chief
We’re proud to announce our newest Quad Member of the Month, @jessica.mckenzie ! Swipe to see what her fellow Quad members had to say!
Want to know what the Quad has been busy working on this week? Guess you’ll have to visit a stack when Issue 5 goes on stands tomorrow!
Attention Jaspers! Looking for a Valentine’s Day date? The Quad’s got you covered! Pick up our latest issue (on stands now!), scan the QR code found on p. 3, and let our matchmakers do the work through the month of February! #VDay#thequadrangle