The Manhattan Jaspers came out steaming hot, hitting 6 of 10 three’s in the first 13 minutes, but would go on to be out-scored 43-68 for the rest of the game. The Jaspers lost, 66-81, to their ACC opponent in the first game of the season for both teams. While the Jaspers will return to action on Tuesday against another tough opponent in UMASS, here are some key points to take away from Saturday’s game. 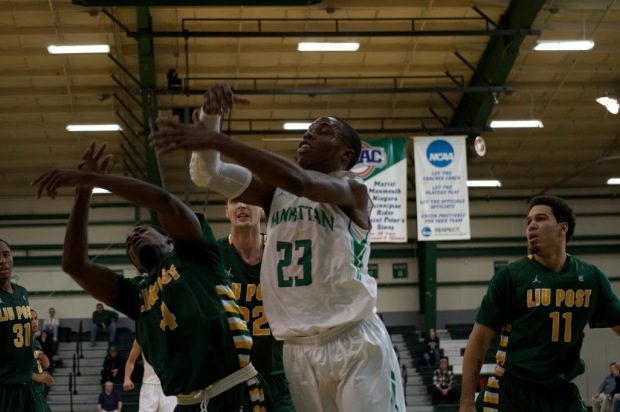 Manhattan committed 35 fouls in the loss against Florida State. Photo by Kevin Fuhrmann.

Manhattan’s full-court press was causing all types of havoc for Florida State in the first 10 minutes of the game. The Seminoles had just five field goals made at the 7:26 mark in the first half, until the Jaspers started to bail them out. Florida State then went on to make 12 free throws off nine Manhattan fouls in the final seven minutes, which gave them the lead for good.

The speed Manhattan played at for those first 13 minutes were tough to get ready for, and the fouls not only added easy points on the board, but gave the Florida State players a chance to catch their breath.

“Their system is not easy to prepare for when you don’t play against it very much,” Florida State coach Leonard Hamilton said after the game to Seminoles.com. “They create a lot of havoc, and I thought that we were extremely tentative at the beginning of the game.”

While it is hard not to foul playing a full-court press, Ashton Pankey and Emmy Andujar have to find a way to stay out of foul trouble this season. Pankey and Andujar each picked up three fouls in the first half, forcing them to both sit on the sidelines for over the final four and a half minutes. Andujar and Pankey had to watch a five point lead turn into an 18-7 run for Florida State, which put Manhattan down six going into halftime – a lead they would never overcome.

Carlton Allen also committed careless fouls. Allen fouled out in just five minutes, including a 3-point shot, which he had no business leaving the ground to contest.

Three players fouled out for the Jaspers for the first time since 2012.

Tyler Wilson got the start, but Wilson and Stores both played for over 20 minutes. Replacing Mike Alvarado won’t be easy, but both guards seemed up for the challenge against Florida State. 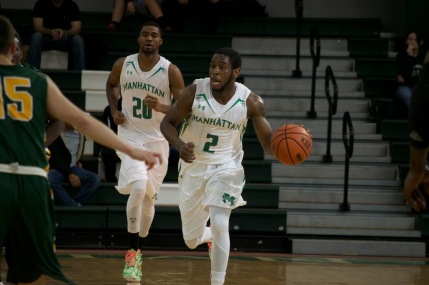 Tyler Wilson was one of the highlights for Manhattan in the loss to Florida State. Photo by Kevin Fuhrmann.

While the stats won’t pop off the stat sheet – a combined 15 points and two assists – both guards were swarming on the full-court press.  Wilson and Stores were a big reason Manhattan got off to its fast start. Although they both fouled out, the game was out of reach when each player picked up their fifth foul.

Wilson was also effective getting to the rim on multiple occasions. He couldn’t finish – ending with no made field goals – but he took nine free throws in the game. After a layup by Robbie Berwick, Wilson sprinted up the court and threw a pass to Richards who passed to Pankey who scored an easy layup. Plays like that won’t appear on the stat sheet, but Wilson’s quickness can change games quickly.

Stores was also effective on both ends of the court. He knocked down 3 of 7 (42.8 percent) from behind the arc and took three charges on defense. Coming off an injury, Stores was still willing to sacrifice his body.

Manhattan came out on fire as it knocked down 6 of its first 10 three point attempts. Once the team cooled down, they had trouble getting the ball to the hoop.

The half-court offense was stagnant. With three new players and a whole bunch of new roles, the Jaspers may still be getting acclimated to each other. If the Jaspers have a go-to guy, it was unclear who it was. They had trouble getting the ball to Pankey down low. Jermaine Lawrence struggled offensively, finishing with as many points – four –as he had turnovers, and Andujar didn’t look to attack as much as he should have.

Give credit to Florida State. Their size made life difficult for the Jaspers inside the paint. Seven-footer Kiel Terpin Turpin disrupted shots and guard Dayshawn Watkins tallied three steals.

“They got out to our shooters,” head coach Steve Masiello said to Seminoles.com after the game. “Their size is so imposing when you get in the lane, they force you to make tough two’s and that’s why they’re such a great defensive team.”

Andujar was able to get to the rim during the second half, and that’s when Manhattan’s offense seemed to look at its best. Andujar’s strength allows him to finish at the rim, while he has a strong sense of where to distribute the ball when he’s in the lane. Andujar may have to be the spark plug for the Jaspers this season.

“I don’t think we played up to our capabilities,” Masiello said to Seminoles.com. “But that’s why we close at Florida State and what we can do is learn from our mistakes, get better and turn the page.”

And for our last (but not least) post of the year, a huge congratulations goes out to our November Quad Member of the Month, Meg Dreher. Meg served as our Editor in Chief for 2019 and has done an amazing job. Swipe to see why we all love her! 📰
And just like that, our final meeting of the semester comes to a close! Thank you to all of our hardworking staff for making this paper a reality every week. Don’t forget to pick up issue 14, on stands now! #wedojournalism 📰
A huge congratulations goes out to our new editor in chief for the 2020 calendar year, former news editor Gabriella DePinho! Thank you to all five candidates who ran and gave their amazing thoughts on the future of the paper! We can’t wait to see what the new year brings! #youdidjournalism 📰
A very happy birthday wish goes out to our assistant production editor, Nicole Rodriguez! Swipe to see why we love Nicole! 🎉🎁
A huge congratulations goes out to our October Quad Member of the Month, freshman student Anna Woods! Swipe to see why we voted for Anna! 📰🎉
Attention, Jaspers! Our special issue, “The Taboo Issue” is on stands now! If you haven’t already, grab your copy from a newspaper rack near you today, but don’t delay, because we’re proud to say they’re already flying off the shelves. #wedojournalism #specialissue #manhattancollege 📰 🤫