Bethlehem, Pa. – The start of the 2014-15 men’s soccer season began on a sour note for the Manhattan Jaspers, losing 1-2 to the Lehigh Mountainhawks. 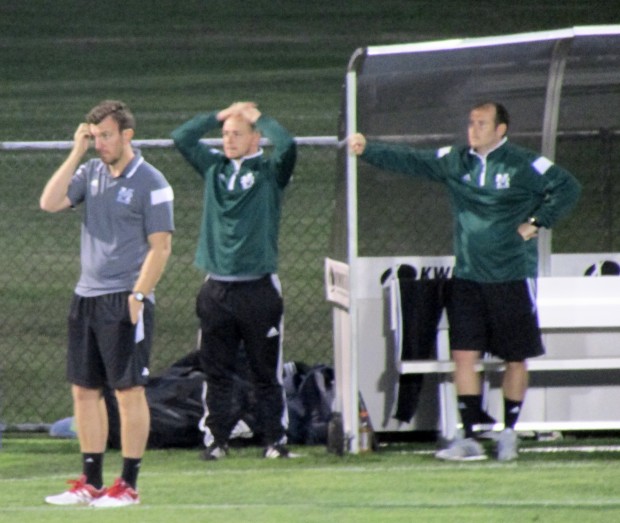 Despite the loss, the Jaspers showed fast pace, formidability, heart and relentlessness. Goalie Alex Coates McDowall recorded 11 saves and Eugene Heerschap scored the Jaspers’ lone goal in the sixth minute of the game.

Early energy ignited from Heerschap’s quick score was seen as a “defensive breakdown” by Dean Koski, the Mountainhawks head coach, who said he and his team were never comfortable because they thought the Jaspers could find the goal at any time. It turned out to be the exact opposite.

The Mountainhawks were the ones to find the back of the net not once, but twice. Even then , he thought it was not enough to hold off the Jaspers.

“We wanted to make sure that we tried to find that third goal,” said Koski. “We didn’t due to Manhattan’s defending and our inability to finish. It was game that could have gone either way.”

Little did he know, there would be no more goals for the rest of the game once his team took the lead going into the second half.

Both sides had many chances to score. Each team looked slow to the ball and neither could finish near the goal.

As for Manhattan head coach Jorden Scott and his Jaspers, they never played with the same energy a quarter of the way into the game. He thought in the second half of the game down 2-1 they could “compose ourselves, make a few changes…come out and try and take the game.”

“There was a period in the game where we lost our way,” said Scott. “… We just didn’t handle the situation well for 20 minutes and it cost us a game, sadly.”

In the first game of the season, both the coaches and players thought there was a lot to improve on from the loss. Some of the uncontrollable parts were opening night, under the lights and nerves.

Besides those game changers that should dissipate with time, two big factors toward the loss that can be helped was playing on wet grass, as opposed to the familiar Gaelic Park turf, and the Mountainhawks’ constant use of substitutions.

“I felt we were a little bit rusty on the grass field,” said McDowall, “and weren’t as prepared maybe as Lehigh were in terms of fitness. They made a lot more substitutes than we did as well.”

Lehigh’s subs brought fresh legs onto the field and a consistent level of pressure that never let up, which does not help a team like the Jaspers who rely on possession which needs the game to slow down, said Scott.

Scott also said the Jaspers didn’t do a good enough job of alleviating the Mountainhawks’ pressure by passing it to the furthest player forward in turn players try “…so hard that technically they let themselves down… .”

If someone who knew nothing about soccer watched this game between the Jaspers and the Mountainhawks, they would probably say it was pretty even.

“I thought we deserved at least a tie of the game,” said Scott. “I thought we could have taken it to overtime but that’s soccer. … It’s the smallest things and that post tonight really was the difference.”

I joined the Daly Dose Of Hoops staff in the fall of 2016 and am the beat writer for Wagner College and the Northeast Conference. I'm also the editor of this here website, WerdyNerdy Space, and a contributor to The GWW. My background in journalism started as a sports intern for the Riverdale Press and News 12 The Bronx/Brooklyn and as a breaking news intern at the Staten Island Advance/SILive.com. I graduated in 2016 from Manhattan College with a Bachelor of Arts degree in communications, concentration in journalism. While in Riverdale, I wrote for Manhattan's student newspaper, The Quadrangle, where I began as a staff writer before becoming assistant sports editor, sports editor and senior writer. During my time at the Quad, I earned Manhattan's Excellence in Journalism, Best Sports News Article and Most Prolific awards, including nominations for eight similar awards in my four years.