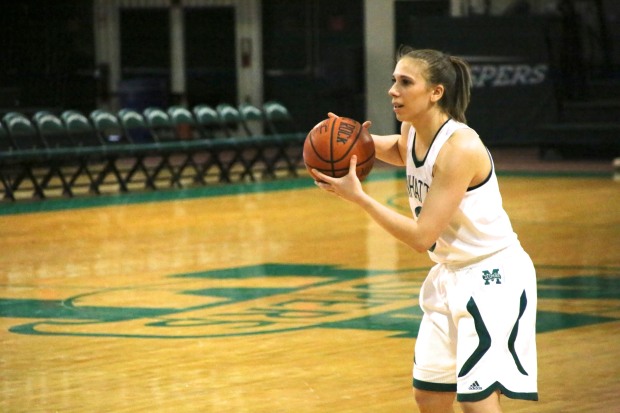 Allison Skrec, above, finished with 10 points and six assists in the loss to Rider. She had 14 points, five rebounds and five assists in the win against Siena, and has been a bright spot for Manhattan despite its struggles. Photo taken by James O’Connor

It was a special day for Manhattan College as nearly 25 former members of the women’s basketball team were in attendance to see the Manhattan face Rider on Feb. 1. The team was coming off of a win against Siena on Jan. 30 and gained an early lead over Rider. The Jaspers couldn’t maintain the lead and lost 73-56. Manhattan (4-8 MAAC, 5-16) is now eighth in the conference.

The Jaspers snapped a three game losing streak to beat Siena, 62-55, on ESPN3. The lead went back and forth for a bit, as the Saints went up 6-2 before the Jaspers scored five straight. After Siena was leading again at 8-7, Manhattan would go ahead for good at 11:31. Allison Skrec’s layup at 1:54 of the first half made it a ten point lead for the Jaspers. The Saints finished the half on a 5-0 run for a 26-21 score at the break.

Siena opened the second half with a basket to cut the lead to three. However, Nicole Isaacs responded to make it a 29-23 lead for the Jaspers. At 13:33 in the second half, Shayna Ericksen hit a layup and Ashley Stec made two free throws to help the Jaspers gain their 10-point lead once again. After Siena’s Kanika Cummings brought the Saints within six, Kylla Champagne hit back-to-back baskets to give Manhattan a 50-40 lead. Not much scoring happened between both teams over the next four minutes, with only a free throw by Cummings. Siena’s Tehresa Coles hit a layup to start up the scoring again, but Skrec put the nail in the coffin when she sunk two free-throws to put the Jaspers up 59-47 with 1:05 to play.

Saturday’s game, however, didn’t go as well for the Jaspers. They started off with a 7-0 run in the 1:39 into the game, but Rider would then go on their own 7-0 run to tie the game. The first half would end with a 34-26 Rider lead. 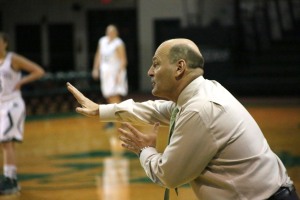 Manhattan honored the former members of the women’s basketball team at halftime.

“To see people from 1979 to 2013 is pretty special,” Manhattan alumni Lisa Toscano said. Toscano, class of 1979, helped build the team into what it is today. “It started off very, very slow and it has grown to a Division I basketball team. We played maybe three games that first year. Now they are playing full seasons in the NCAA – it’s really come far.”

About The Quadrangle (1452 Articles)